On the Relationship Between Post-Internet Art and Fashion Design practice

January 2019, Viktor & Rolf presented their Haute Couture collection in Paris and created a social media frenzy. The memefied collection titled Fashion Statements proposed voluminous dresses stating: “I am my own muse”, “Is fashion overrated?”, “What is your position on climate change?”, “Give a damn”; ready for online circulation. The dresses went viral on social media, shared widely across every fashion and meme-raker’s Instagram accounts. 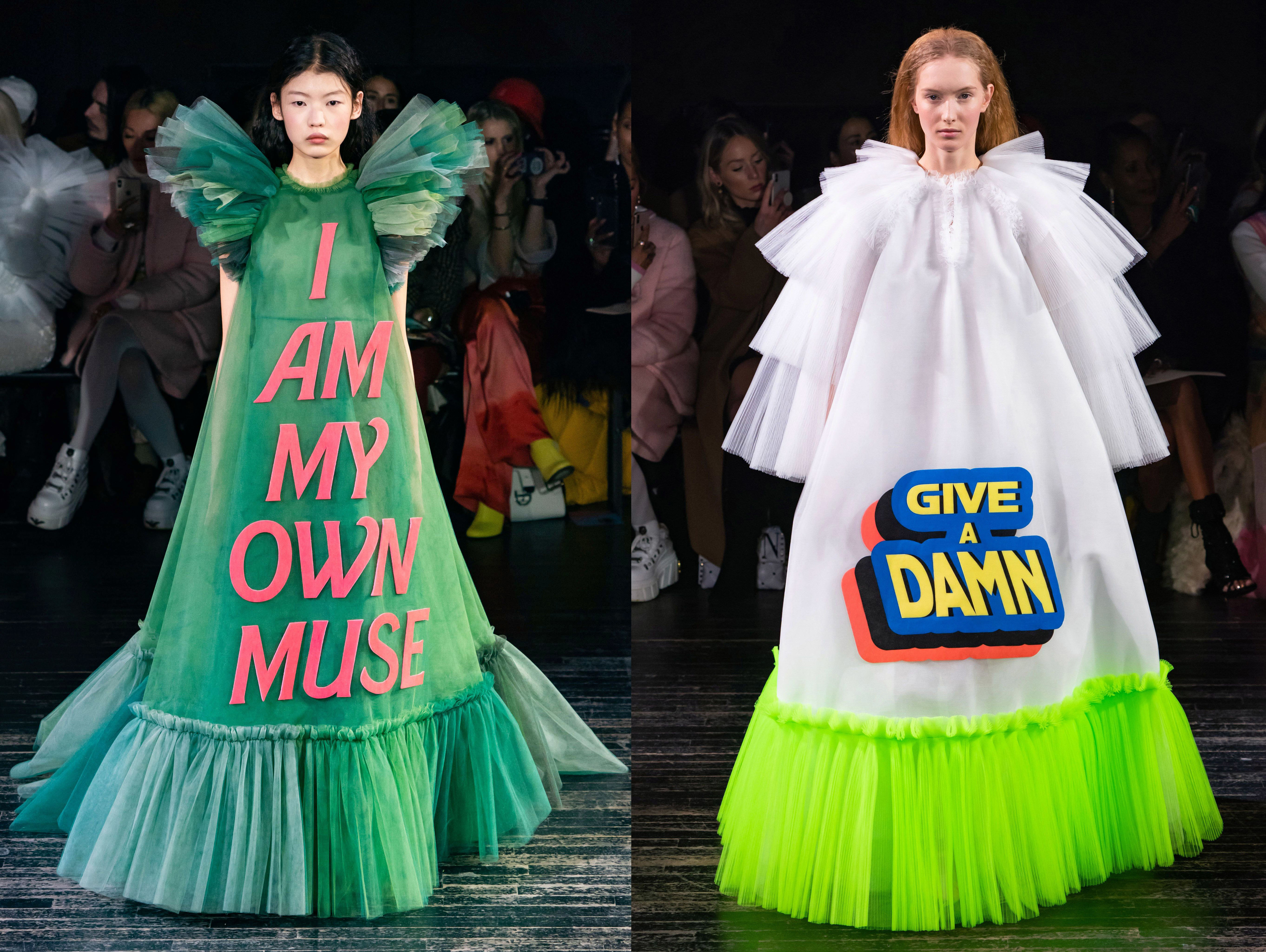 January 2019, Viktor & Rolf presented their Haute Couture collection in Paris and created a social media frenzy. The memefied collection titled Fashion Statements proposed voluminous dresses stating: “I am my own muse”, “Is fashion overrated?”, “What is your position on climate change?”, “Give a damn”; ready for online circulation. The dresses went viral on social media, shared widely across every fashion and meme-raker’s Instagram accounts. Our digital collective consciousness is hungry for online stimulation. In the age of hypersignification, designers and communication managers are increasingly starting from the question: will the collection, the campaign, hook my followers on Instagram? How are we incorporating internet culture into design practice? How do we define the relationship between Post-Internet art and fashion design practice? Through general translation and recontextualization, the design process is now a spirally negotiated interaction between artists, designers, manufacturers and customers; creating a digital vortex. This has created new markets, new aesthetics, behaviors, and developed large-scale fan databases via social media.

This initial research looks at the relationship between Post-Internet art and its impact on fashion design processes. The artistic use of the internet as a mass medium and the translation of its content into physical space is a constant game of experimentations between online and offline. The Post-Internet was initially described by artist Marisa Olso in a 2008 interview conducted through the website ‘We Make Money Not Art’. She discussed the importance of addressing the impact of the internet on culture at large and examining how it is experienced within online creative networks. It often engages in and comments on the fluctuating nature and saturation of the image, the circulation of cultural objects and of the self, the idea of hyperreality and the obsolescence of the physical.

Both art and design often employ the visual rhetoric of advertising, graphic design, stock imagery, corporate branding, visual merchandising, and commercial tools. Branding and corporate aesthetics have been historically consistent, reappearing at key moments to redefine the relationships between art and commerce. Historically, satire as a subject has often been part of the production and communication of art and design. With the rise of information theory, due to global communication, humor is now often used to engage user audiences, evoke amusement, offer constructive social criticism or act as a device for critique. Not only providing ambiguity in function and representation, irony is a popular communicative approach to the design of image-objects in the online space. 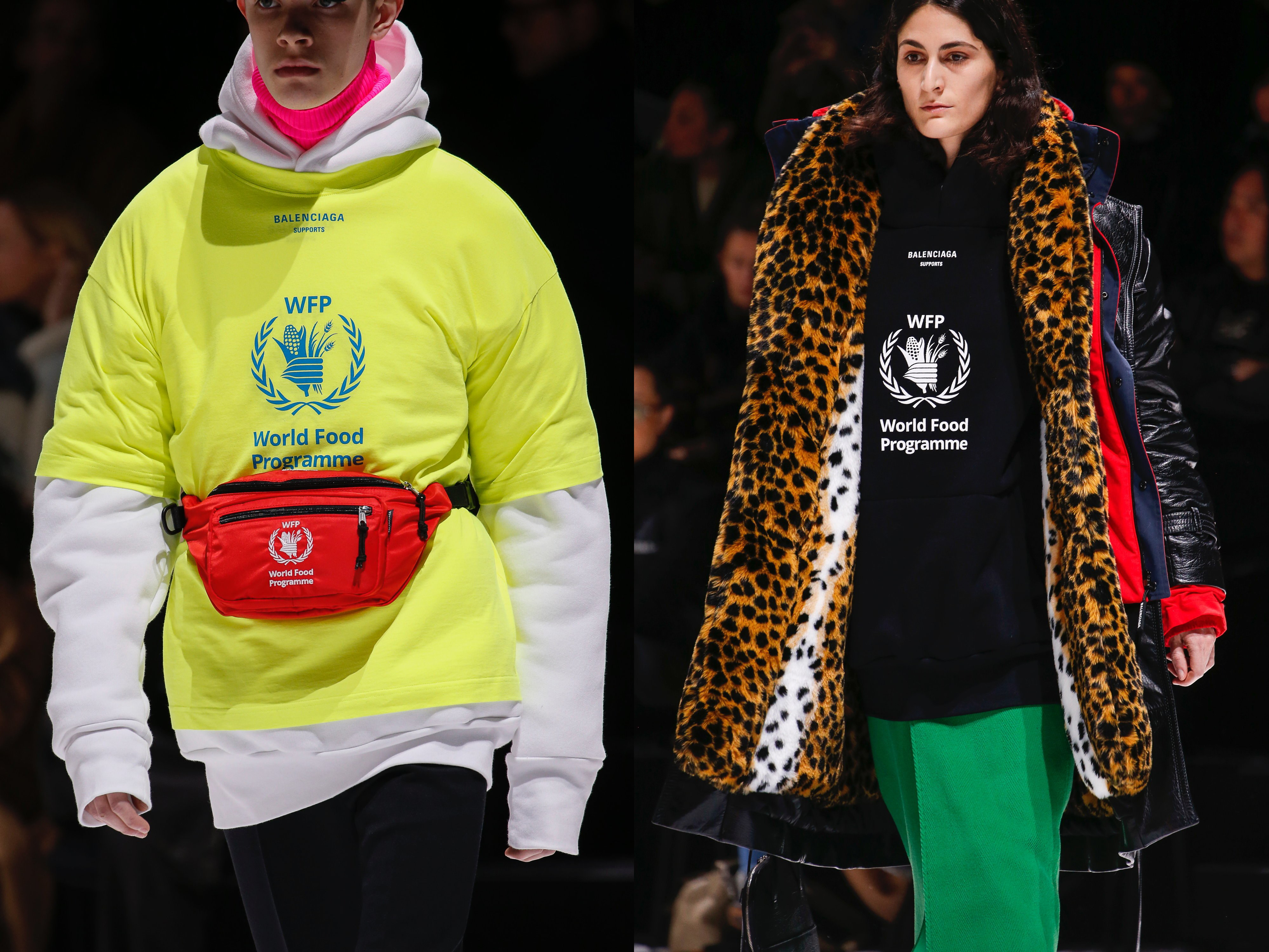 Irony in fashion has taken multiple forms such as imagery, physical expression, or association (collaborations). More recently this has taken the form of an assemblage or collage of digital stuff re-contextualized into new forms of visual advertisements or memes—marketing-like strategies. Fueled from the association with nostalgia, they are re-appropriated in a fashion context in an attempt to produce attention-grabbing visual statements. This phenomenon encourages cross-industries corporate collaborations by brands such as Vetements (DHL), Supreme (White Castle and Playboy), Moschino (McDonald’s, Barbie) and Anya Hindmarch (Kellogg’s, Boots, Carrefour); representing familiarity, banalisation, and global capitalism. In China, in an attempt to reach the youth market, the Food and Drink industry is backing more and more designers such as UNDEFEATED (Budweiser), Angel Chen, Yirantian , and Deepmoss (Lipton), Leaf Xia (Magnum Ice Cream), C.J. Yao (KFC) and Su Guang Yu (Pepsi). This trend has also developed collaborative projects offering positive social messages like Balenciaga x World Food Programme (FW18) and Telfar x White Castle (SS18), where all of the proceeds of the latest were donated to the Robert F. Kennedy Human Rights, Liberty and Justice Fund. 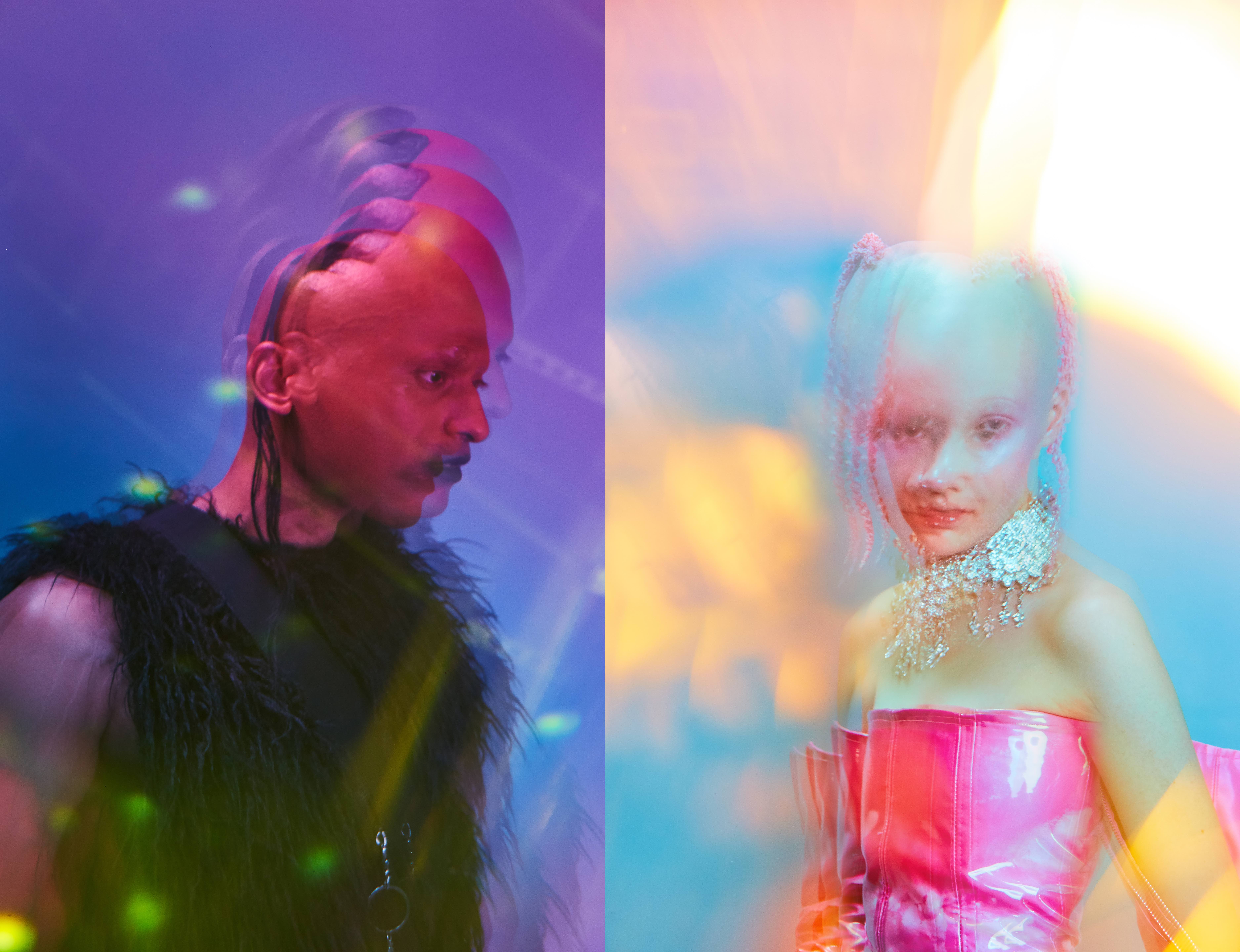 The Extremization of the New

We see the fascination of experimentation. The critical element and the counter’ connotation of a large part of arts in the modern understanding are linked to the search and extremization of the new. Art, which searches for the new, in order to be appreciated must often be annoying and disturbing, hence different and ‘opposing’. In October 2019, in NYC, I led a panel discussion with the instagram duo Fecal Matter(@fecalmatterworld, @matieresfecales), titled “ Provoke: On the Relationship Between Internet and Creative Process”. Fecal Matter have created a world of dark, confrontational fantasy that encourages critical and free thinking about our own beliefs and perceived realities. Their views are not only expressed by the subversive aesthetic, but also through their whole method of construction, promotion, and distribution. They both care about social change and have for mission to empower humans to celebrate their creativity. They challenge what is means to be human and challenge the gender norms. They are designers, musicians, models, photographers, performers, directors, and activists.

In the context of fashion design, the uniqueness or complexity of an object emerge as sites of intense cathexis. As a result of the saturated visual online explosion, filled with the sentiment of pseudo-authenticity or post-identity conceptions, the crave for “original, genuine, sincere, or authentic” is also rising. The “artisanal” or “untouched” is now an object of fantasy. This reaction can be seen in recent celebration of the work of Caroline Hu, the inaugural 2019 BoF China Prize winner, and through the 2019 LVMH finalists whose work demonstrates diversity, ethical production values and observance of craft. 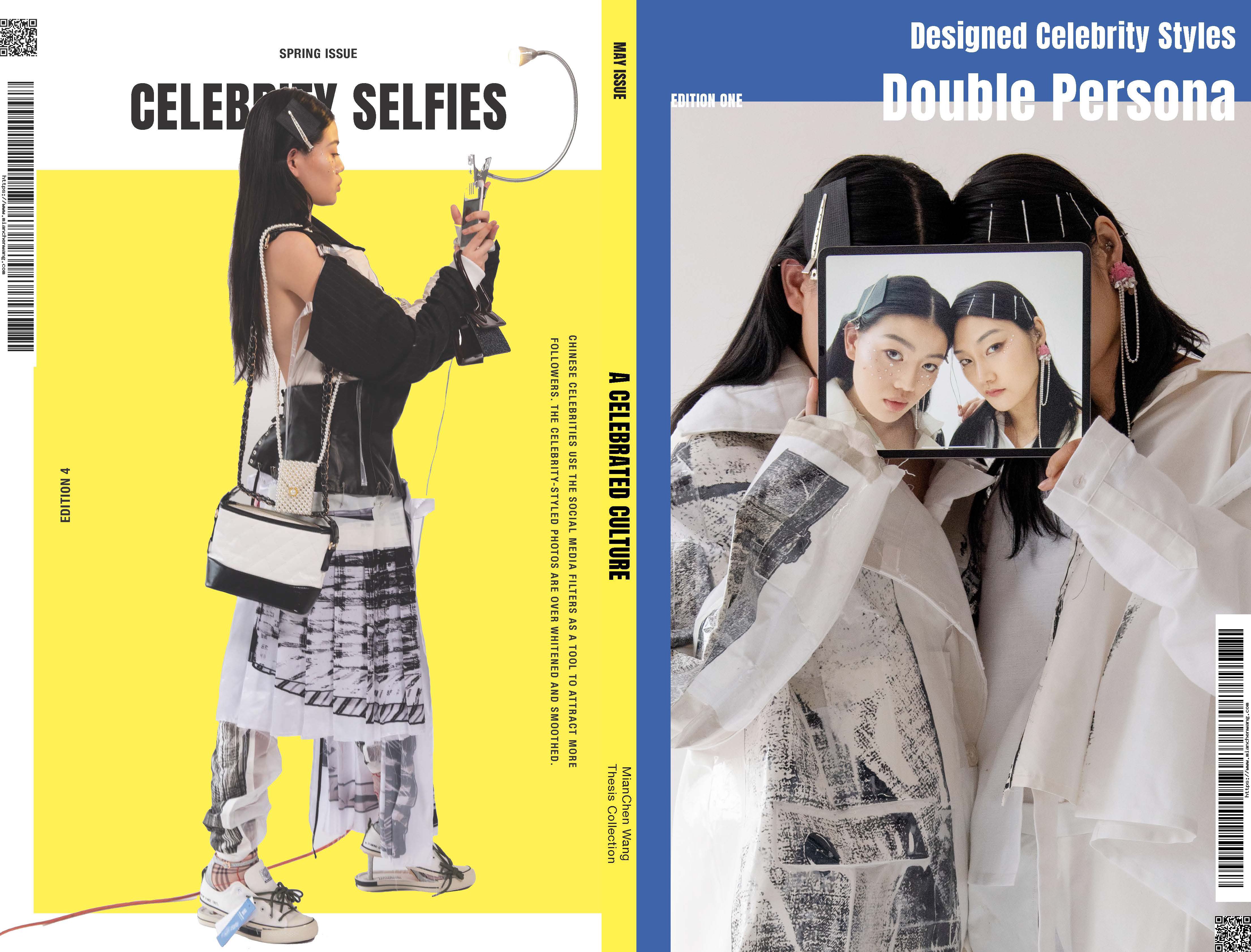 How can reproduction, copying, exaggeration, excess, dissemination, categorization, and obsession be translated in design practice? For Instance, one of my students, Mianchen Wang, studied at celebrity culture on various social platforms such as, TaoBao, Instagram and WeChat. Her collection, titled “Celebrated Culture” depicts the popular celebrity culture in China. The fact that most of her friends in China are trying so hard to be famous today, made her curious about this irrational human behaviors. She studied different online behavior in regards to fanatical situations and experimented with new design processes using the online as a source for circulation, production and commentary.

As an interdisciplinary practitioner and academic, my interest lies on the investigation of experimental design processes and in understanding the current state of global design practice. My current research aims to develop a theoretical framework based on recent art practice and its influence on fashion, offer new understanding on how design relates to the complex socio-political and technological changes, and propose alternative design processes and experimental methods. The ever growing complexity and diversity of the fashion field opens new questions: What if we talk about futures not future? What is post-fashion? After Fashion? How can design respond to the fictionalization and virtualization of reality? This exhibition Making FASHION „Sense” does just that. It challenges us to build new relationships to what a garments or fashion can be.