On the Swiss Psychotropic Gold Refinery 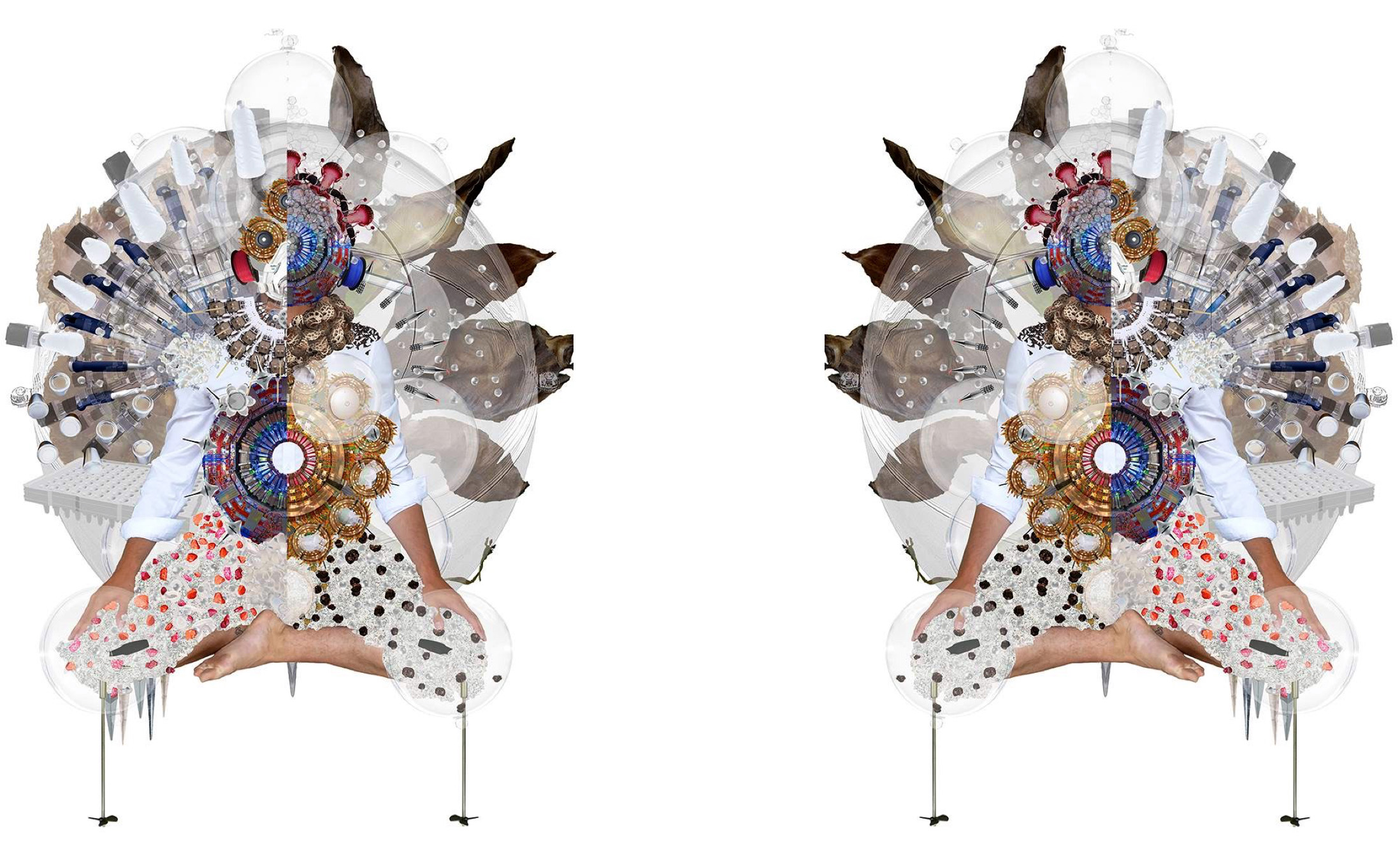 Nina Bandi: ‘Swiss Psychotropic Gold’ entailed intense research, in which you brought together different materials, actors, and forms of knowledge – collective and practical, in particular – and its materializations. Gold as raw material and commodity, but also as metabolism; gold as an entanglement of historical, material, and affective layers. Tell us more about these issues.

knowbotiq: Three issues come to mind immediately. The Psychotropic Refinery as a platform for postcolonial encounters, the critical relationship of our practice to “art as knowledge production”, and finally gold in its transforming and moving materiality. Let’s take up the last first because it was critical to the initiation of the project at hand. When Draft [i] invited us to develop a project on art in the context of current public debates in Switzerland, we started exploring for a subject that was specific to Switzerland, but not necessarily visible. Soon after, our attention was drawn to Switzerland’s close relationship and intertwinement with global finance and commodity trading. Add to that, the current debate over the legal responsibility of international corporations with headquarters in Switzerland, and commodity trade was suddenly a very compelling option. [ii] Our initial research revealed that in the colonial and postcolonial contexts of commodity trading only two raw materials have been imported to Switzerland for the purpose of refining, processing and finally exporting. One is cacao and the other gold. In Calvinist Switzerland, both commodities satisfy the desire for luxury. During our research we came across Stoffe in Bewegung [Matters in Motion] (2014), an anthology edited by Kijan Espahangizi and Barbara Orland. [iii] The book deals with extraction, circulation, alchemy, flows and transformation of materials. https://vimeo.com/394395331/8d4399e15e Gold and cacao are not only shipped across the globe but they also move through bodies and things, thereby introducing the molecular and affective into the discourse via metabolic processes. We call this transformational and affective understanding of materiality “Roh-stoffwechsel,” a concept that is hard to translate into English [iv]. With a bunch of research behind us, we finally decided to work on the “Roh-stoffwechsel/metabolism of gold” and the narratives of violence surrounding this conflictual metal, and to concentrate on the suppression and elimination – amnesia – of the (post)colonial legacy, which is apparent in many public spheres in Switzerland. We have tried to initiate a process in which the violence-ridden journeys of gold begin to “speak” physically, haptically, auditorily, and visually through its molecularizations, dispersals, diffractions, and derivatizations. At the same time, however, as artists we do not ignore our own involvement and complicity with systems we are engaging with. Through this project, we also examine our own responsibilities and reflect on what it means to inquire into prevailing imaginations, in order to generate accountabilities.

Nina Bandi: Could you explain “psychotropic” more at length?

knowbotiq: Let’s return to “Rohstoff-wechsel.” In his book My Cocaine Museum, Michael Taussig brilliantly elaborates on how the above-mentioned metabolic processes of gold are mostly libidinous by unfolding the close affinity of cocaine and gold. Nervous psychotropic desires and appetites surround the shiny, precious metal – “gold as a drug.” The psychotropic is so important because the psycho-active struggle and greed for gold interacts directly with the imaginary and an irrational production of the real. Gold and its political constitution arises out of collective and social imaginations whose effectiveness cannot be grasped by means of statistics, diagrams, and scientific reports, which in our age of digitalization, algorithmic access and optimization, often form the basis of the real. The release of endorphins and dopamine induced by greed, spike in testosterone as a result of trading in gold derivatives, spiritual experiences of meditating on bullions, or the libidinousness of patriarchal gold as jewelry, are excessive affective narrations, far beyond the simplistic stories often found around the metal. To quote a currently somewhat over-quoted Donna Haraway: “stretch the imagination and you [can] change the story.”

Nina Bandi: Is this approach also related to your stance on “art as knowledge production”?

knowbotiq: Our practice is not just about the production of knowledge. It is important for us to distance ourselves from the attempted neoliberal appropriation of art as knowledge production, which often implies an academization and depoliticization of artistic practice. We are much more concerned with exploring micro-sensory and micro-political investigations of perception, experience, speech, etc. within the existing western knowledge apparatus. The Psychotropic Refinery is not only a symbolic metaphor but more specifically a machine to open up encounters with ghosts and caretakers: a “critical fabulation” loosely borrowed from Saidiya Hartman, which Elke Bippus, with regard to our practice, refers to as “molecular fabulation.” 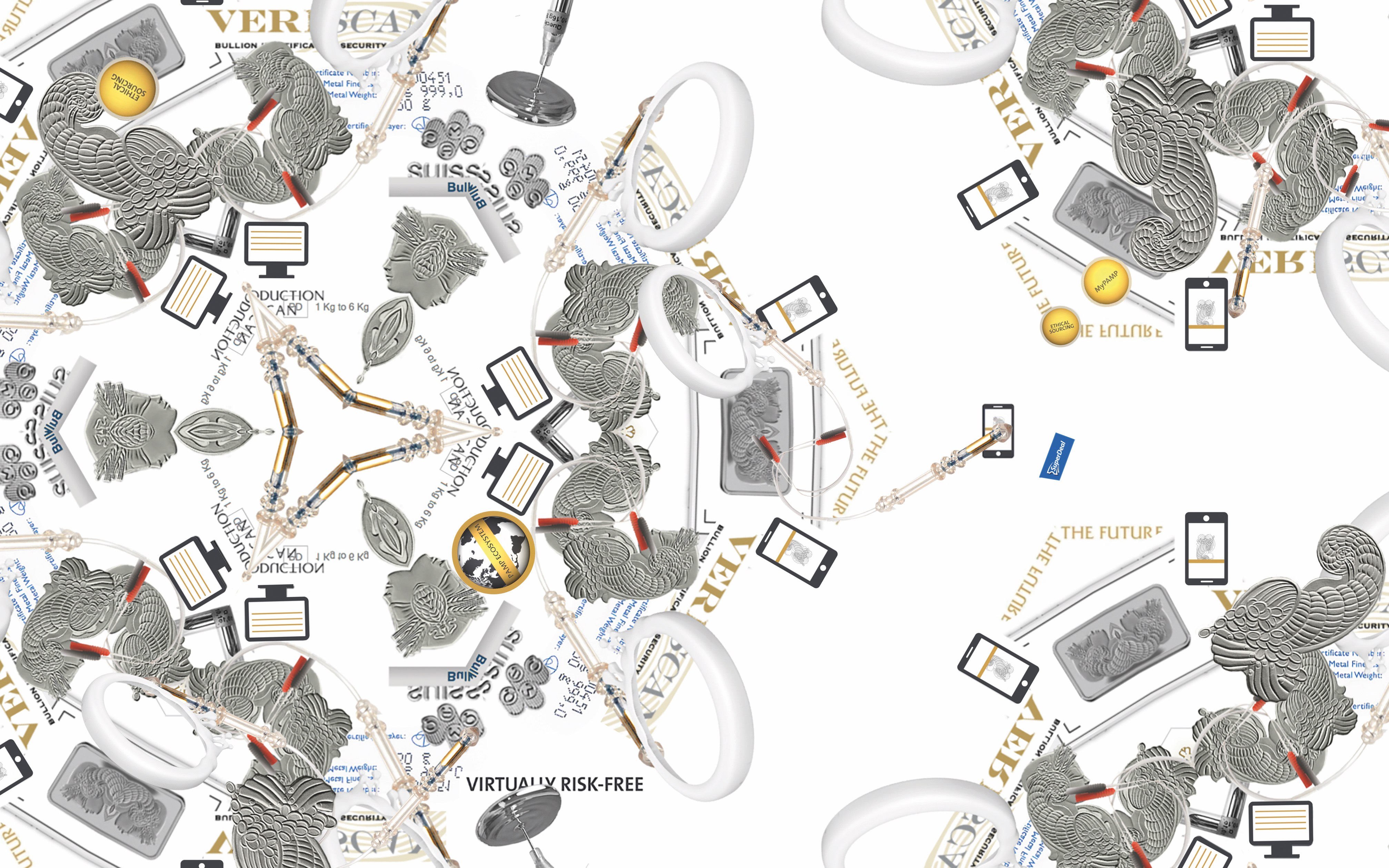 Nina Bandi: Within the project several exhibitions and performances of the Swiss Psychotropic Gold Refining took place already. To what extent can the Psychotropic Refinery be tracked down in these various formats?

knowbotiq: Well, there’s no straightforward answer to that question. In order to approach the Psychotropic Refinery, we tried to call on the social imaginations fed by a kind of a connective unconscious. That’s why there were visual, acoustic, olfactory, as well as haptic elements in different exhibitions and performances we did. We worked with mantra-like videos, with renmai [v] acupuncture using gold plated needles, we meditated and did awareness exercises on bullions and jewelry, and exposed ourselves to vaporized “Golden Viagra” pills, and minimal doses of henbane essences, a hallucinogen used in witchcraft to address unconscious. These activities were crisscrossed by the very slowly, micro-performing, abstracted body of a dancer. Visitors were invited to move barefoot through a summery exhibition space and, activated by acupuncture, to smell the ubiquitous molecular Swiss gold. In all the edifferent formats, it was important for us to facilitate encounters with the postcolonial affections of gold and to encourage visitors to deal physically with the latency of the structural violence of gold. It requires sensitivity, response-ability, and a willingness to confront and critically encounter oneself and the communities we live in. However, self-love, hedonistic life cultures and the moral superiority of the wealthy were strongly present in those places where we presented versions of the Psychotropic Refinery. During our research in Switzerland, people had told us that they meditate naked on gold bars in order to charge their bodies with specific frequencies and dissolve their blockages. One could call this and other such suspensions of disbelief the “ghosts of gold.” These ghosts might point the way to the dominant narratives of gold, the victims’ experiences of violence, the ruthlessness of environmental poisoners, the care of activists and to the caretakers actively protecting the metal in the geological strata. 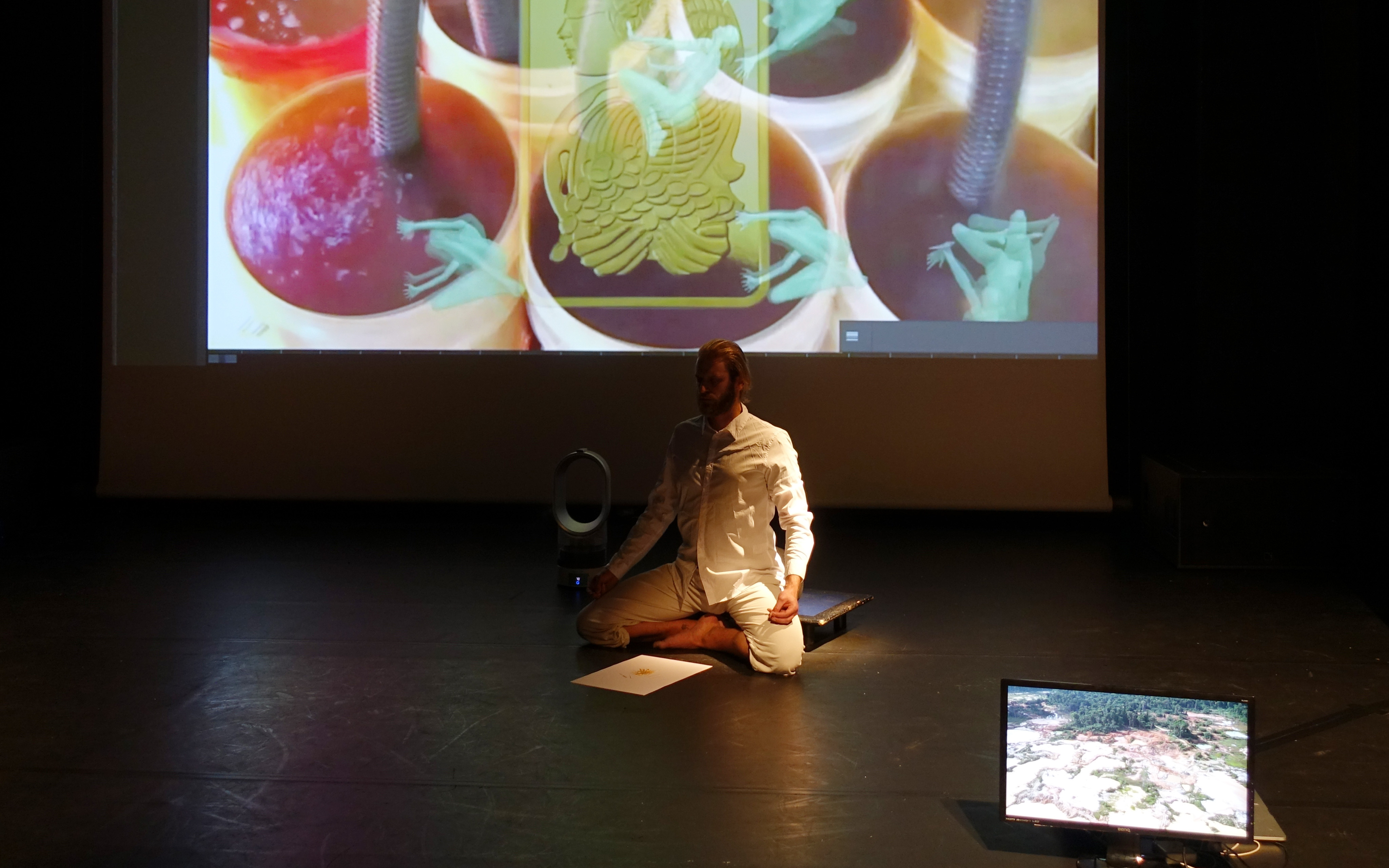 Nina Bandi: How does your concept of “healing” relate to what you just described? How is it enacted in the “healing practices and techniques” in the exhibitions?

knowbotiq: Our concept of healing is not one of “healing from something,” which is anyway not possible, but refers to activation, to setting something in motion towards an undetermined direction. This can have sensitizing effects, but can also generate turbulence of all kinds. We were surprised at how numerous, and sometimes innocent, visitors to the exhibitions accepted these “treatments” and were willing to temporarily withdraw from the somewhat dominant “retinal” format of exhibitions. We see these engagements with other forms of corporeality in the exhibition space also as a form of criticism. Criticism here is not just about pointing out and exposing, as is done in many documentary practices, but about the possibility of participating in the performativity of the materialities and the stories of the objects, the sounds, the imaginations activated by gold plated needles. Criticism is not passing judgment but rather a practice of reflecting on the conditions of one’s own perception, and of knowing and “not-being-able-to-know.” And it became particularly interesting in those moments when the physical encounters with ‘Swiss Psychotropic Gold’ became an intensive confrontation with inhuman(e) materiality, opening up “non-enlightened” forms of critical experience.

Top image: Swiss Psychotropic Gold – The Molecular Ghost 2 – A ghost never dies. S/He remains always to come and to come back, knowbotiq 2017